THIS IS ADVENTUROUS BOATING

My younger brother Charles is a yachtsman who’s done lots of daunting sailing adventures. Among others he cruised from Perth around the northern coast of Australia to Sydney, sailed from Sydney to Lord Howe Island and back and then sailed from Brisbane to Scotland via the Med over several years while altogether racking up 14 years living aboard his 34ft van de Statd sloop, Acrobat, with his then partner, later wife Marie for.

Charles was our inspiration to embark on our own Med adventures following a visit to Turkey and a short cruise aboard Acrobat. He’s a very practical guy being a qualified builder, cabinet maker and shipwright as well as being able to undertake many mechanical and electrical projects. Consequently Acrobat is immaculately fitted out to the high standard needed for ocean passages. But she’s quite basic by our standards having only hand-pumped fresh water, no hot water, no refrigeration and only a cockpit shower. I can’t imagine how Charles and Marie spent all those years living aboard in the Med without cold beer! He jokes that with Scotland’s cold climate lack of refrigeration is not a problem. As Marie is still working Charles does solo voyages from his home port of Lossiemouth in the Firth of Forth (close to Loch Ness and the Culloden battlefield) and is currently on a month long trip North Sea cruise north to the Orkney and Faroe Islands. This is serious sailing – The Orkneys are about half way from Scotland’s north coast to Iceland and the Pentland Firth between Scotland and the Orkneys has some of the planet’s strongest tides – up to 16kn. Quote “the force of the tides gives rise to overfalls and tidal races …. and often give rise to extremely violent sea conditions …. the races are highly visible with overfalls and whirlpools.” 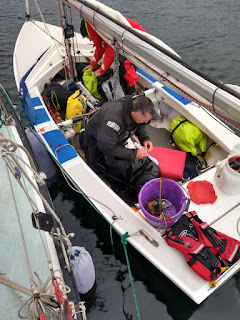 Imagine Charles’s surprise when anchored at Fair Isle a Wayfarer sailing dinghy with two POB comes alongside for a chat. A Wayfarer is a popular UK 4.8m open sailing dinghy and they had sailed about 70nm from Wick to Fair Isle. Then they sailed about another 40nm north in open seas to Lerwick in the Shetland Islands.

That’s what I call adventurous boating. As I write this we’re sitting aboard Rapport on a very chilly but fine Saturday morning, safely anchored at Waiheke’s Owhanake Bay – and that’s adventurous enough for me.

The guys on the Wayfarer were Johnathan and Jeremy both very nice guys and much more hardy than myself. Charles