Here’s an edited version of an article to appear in Pacific PowerBoat's next issue.

We really enjoy our winter cruising, but when it’s dark from before 1800hrs until first light arrives about 0700 the dynamics are quite different to summer cruising when we’re still on the beach or BBQing until much later. These four products have helped keep us safe, warm and entertained during those 13 hours of darkness aboard Rapport.

In days gone by our hand-held lights were usually a 12 volt spotlight with a halogen bulb connected through a cigarette lighter socket and a trusty battery powered Dolphin . When using these during night searches as Coastguard volunteers we often found the boat’s wiring to the power socket was too light for sustained use of the spotlight, due to the heat generated, while the Dolphin had limited range and runtime plus expensive batteries to replace. Also if the Dolphin hadn’t been used for a while we needed to remove and replace the (same) battery, presumably to provide a better connection.

But a technical revolution has been occurring during the last 15 years or so not only with LED bulbs, that provide brighter light, give a higher quality beam and consume less power, but with rechargeable lithium batteries that continue to improve as well as becoming lower cost. I can distinctly recall when I first became seriously aware of this. Technical guru Chris aka MacGyver, our most frequent visitor to Envoy made his first visit in late 2010. We were sitting in the cockpit after sunset in a bay near Bodrum when Chris showed me a black aluminium flashlight about 130mm long, with an LED bulb and powered by a rechargeable lithium battery. This compact light easily illuminated trees on the foreshore, which I guess was about 250 metres away. By comparison the light from my largest flashlight – a clunky unit with 4 x D cell batteries and conventional bulb couldn’t even reach the shore. Flashlights using conventional dry cell batteries lose their brightness early on as the batteries start to lose their charge, however lithium battery powered lights can lose much more charge before their brightness reduces. We now carry one of the new generation MK 7 Dolphins with an LED bulb aboard as one of our low cost general purpose flashlights together with a rugged, no-nonsense looking Teklight ST-3329 we bought from Jaycar Electronics for $159. The Techlight has an incredible 480 metre range and its 4,500 lumens of light (the Dolphin has 200 lumens) provides amazing brightness. It’s waterproof and floats, has a convenient wrist security strap and its lithium battery pack is rechargeable using either a mains charger or USB cable, both supplied. Its full power option provides 75 minutes use while its still very bright low power option increases this to 150 minutes. If the proverbial hits the fan the unit can also emit a continuous SOS signal. In essence the Techlight provides the power of a hard wired spotlight with portability and we love it.

User tips: it takes about 40 minutes for human eyes to completely adjust to darkness so using low level red lighting at the helm and reducing brightness on navigation screens helps maintain night vision. Don't try to use any spotlight through windows and avoid directing the beam on reflective surfaces.

Have we moved - Anchor Watch HD app for devices

When the wind is howling at 40 knots with the boat moving around during squalls as we encountered during early July’s “weather bomb” it can be difficult to tell if your anchor’s dragging during the night, especially as distance is far more difficult to estimate during night time. Most plotters incorporate anchor alarms, but as with our boat these may be on the flybridge and difficult to hear below. Enter Anchor Watch HD – a free app allowing you to maintain anchor watch from below or even while away from your boat.

When you open the app while connected to the internet it shows a Google Earth view of your current location and while Google Earth is not essential to use the system, being able to see your position on a map provides additional reassurance. This view is historical, so boats shown on the map will not be there now. You can change the scale using normal two finger zoom.

After your anchor is set press the anchor button and an anchor icon with an orange circle around it appears at your position. Now while the anchor icon remains in the original anchored position a blue/white/blue circle shows your current position. There are two on screen buttons to the right of the anchor button that increase and decrease the alarm range, which would typically be about 15 metres to allow for some sideways movement. The actual range displays on top centre of screen together with the distance and bearing from your current position to the original anchored position. If your vessel moves outside the set alarm range a volume adjustable (seriously loud at full volume) siren sounds and a dialogue box appears allowing you to ignore the alarm for 30 seconds while you adjust the scale or “raise the anchor”. The app can also send an alarm message by sms or email allowing you to monitor your anchored position while going ashore.

User tips: the app consumes a lot of power so keep your device charging when it’s using this app. Make a note of your GPS position after anchoring so that if you suspect dragging you can compare that with your current GPS position.

Even on cold nights, once we start cooking the boat warms up quickly and when using our generator we can also run our 2.4Kw electric fan heater. At other times we use our Gasmate portable heater with its ceramic burner providing an atmospheric warm glow. We bought ours from Bunnings costing $140 and using disposable 220gm butane gas canisters costing about $1.40 and lasting about 90 minutes. It’s very safe as a simple lever disconnects the butane cartridge when not in use and gas supply automatically stops if the unit should be accidentally knocked over, the oxygen level becomes too low or the flame goes out. It’s piezo ignition works well and it’s compact and smart with the butane cartridge housed within the casing.

User tip: when using the Gasmate allow some fresh air into your boat and never use it while sleeping. 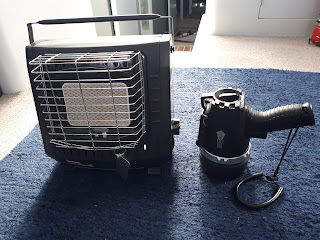 Entertainment during those long nights - RSE Mini-Lite Plus

We promised ourselves our next boat would have Sky TV capability to watch favorites such as Super Rugby. When we bought Rapport she already had an Avtex flat screen and a TracVision TV5 satellite dish enabling us to watch free to air TV. Our friend Chris suggested buying an RSE Mini-Lite high definition digital satellite receiver enabling us to plug in our Sky card from home. The unit is easy to install, attaching to the rear of the flat screen and wired to our AC power supply. It’s performed well and accesses Sky channels wherever we are, except for some unknown reason Oneroa. The RSE unit costs $199 and can be bought through RSE in Takanini or providers of caravan accessories.

User tip: the power to the Mini-Lite and screen must be off before you insert and remove the Sky card. If you don't do this the Sky card will no longer work until after it's used again in your box at home.