We’ve owned Rapport now for a year and a half, finding her to be a great cruising vessel, however when you buy a pre-owned boat you inevitably make compromises compared to your perfect desired boat. In our case there were three compromises, which I’ll discuss.

1. Rapport has a large flybridge with full headroom and our compromise here was having plastic clears as opposed to glass. Particularly facing forward, glass is a big plus especially in heavier seas when there’s a lot of spray reducing visibility. However Rapport’s clears are exceptionally good being polycarbonate which appears to retain its clarity for longer than vinyl and we’re just about to treat these with RainX-Plastic which should considerably increase visibility with rain or spray. In general we’re pretty happy with these clears and won’t consider glass as an option until it’s time to replace the clears. 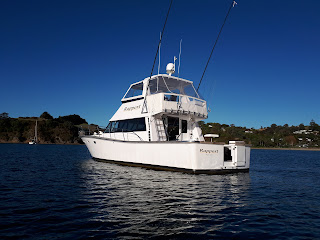 2. We prefer gas cooking to electric. There’s a lot said about gas safety issues, but we’re perfectly comfortable with professionally installed lpg systems with gas detectors. The main plus with lpg is you can cook without running a generator. Rapport has electric bench top hobs and a convection microwave. It took a while to get used to the convection microwave and while Di says she would still prefer a “proper oven” we find it adequate, supplemented by an electric frying pan. To avoid having to start the generator just to make a morning cup of tea or coffee we bought a small bench top single hob “Gasmate” stove. This uses disposable lpg bottles which only cost $1.35 and last one or two days. We also use this for boiling vegetables etc. There’s no problem using electric cooking while the main engines are running and charging the batteries, in fact for any electrical device that uses heat like kettles, toasters and hair driers an engine or generator needs to be running due to high current draw. Using the generator for cooking in the evening is also not a problem as we often need to run it to charge our house battery bank, particularly if we haven’t run the main engines that day. In the summer most of our cooking is on a lpg BBQ and we really enjoy using that. So in conclusion we’ve adapted and will continue with the present system.

3. As you will have read in our last posting we really enjoy using our dinghy and ideally wanted a 3m rigid-hulled inflatable with a 15hp 4-stroke outboard, lifted on board by crane. Rapport came with an old TakaCat inflatable that after a few weeks we literally threw away as it had so many air leaks. In any case its 6hp Mercury outboard was too heavy for us to comfortably lift on and off the dinghy. 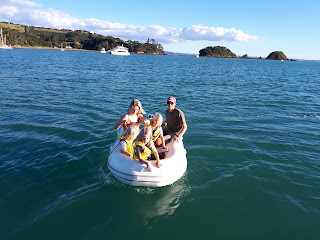 As Rapport came without a crane and we needed something in a hurry that the two of us could lift onto the foredeck cradle we bought a very lightweight (33kg) Aquapro SLR 2.6m rigid-hulled inflatable with a Honda 2.5hp air cooled outboard. We had one of these Hondas in the Med and found it to be super – very reliable and nearly always starting first pull. This package has worked well but was always a temporary solution. We’re now going to sell the Aquapro/Honda and upgrade to an approx 3m rigid hulled inflatable with a 15hp 4-stroke outboard. This will give us planing ability with at least two adults, more room when we have often have four adults aboard, longer range and better rough water capability. Not to mention much more fun! Bear in mind that on a typical coastal cruiser your inflatable is also your life raft in a worst case scenario. In order to lift this dinghy aboard Rapport we’ll need to install an electric crane and we’re researching whether we can store the dinghy on a new rack to be built behind the flybridge (preferred option) or on the existing foredeck rack. Also researching which inflatable to buy and whether to fit a Honda, Suzuki, Mercury or Yamaha outboard. However our choice may be be influenced by what is actually available - watch this space.

In many European and North American boating locations Autumn is time to winterise your boat and leave it until Spring, however in Auckland there’s no reason not to swap shorts and tee-shirts for jeans and sweatshirts and enjoy most of what cruising has to offer throughout our winter.

Average weather statistics will surprise you. For example Auckland’s average daytime winter temperature is 14-15dC while by comparison popular cruising destination Scotland has an average summer temperature of only 15-17dC. Also surprisingly, on average January is Auckland’s windiest month while the least windy are March and May through August. In Auckland showers are more prevalent than constant rain and the weather out among the Gulf islands is invariably sunnier than on the mainland. For example we often look back from Waiheke basking in the sunshine to see the mainland shrouded by cloud.

Auckland is New Zealand’s most populous boating area where the Hauraki Gulf’s Mahurangi Harbour and Kawau Bay to the north-west, Great Barrier Island to the north-east and the string of islands from Rangitoto to Ponui in the south offer safe shelter in most weather conditions all year round.

Cruising in winter offers less crowded anchorages, good fishing and also means using your boat regularly, thereby reducing the chances of unexpected problems. I often see owners starting their diesel engines at the marina during winter, however engineers tell me there’s no substitute for using your boat regularly and working your engines under load at normal operating temperature, which can’t be achieved in the marina. In fact I’ve been told that starting your engines without loading them can do more harm than good.

The winter nights are of course longer from around 1800 to 0700 hours. We find keeping warm not an issue with heat from the galley, an electric fan heater powered from our generator and a portable gas heater. Other systems such as diesel heaters are also available. Ensure adequate ventilation when using gas heaters to avoid dangerous build ups of carbon monoxide.

We had planned a ten day family cruise for late May and as departure approaches we watch the forecast with some consternation. The approaching weather system is so unusual that the media describes it as a “weather bomb,” caused by a ridge of high pressure in the eastern Tasman Sea combining with a deep low pressure trough north-east of the North Island to cause south-easterly winds in excess of 40 knots and exceptionally high swells in excess of four metres. A gale warning is issued for the Hauraki Gulf, but only a strong wind advisory for the Waitemata harbour, so we modify our plans to avoid the outer Gulf and enjoy the Waiheke area.

We leave on a Friday afternoon in a light south-easterly breeze and cruise to Owhanaki Bay on Waiheke’s north-west-coast. Here is perfect for the forecast strong south-east winds and we find only a handful of boats anchored here providing us with plenty of all-important swinging room. We’re cautious about this as having anchored many nights over the years in adverse conditions our only problems have ever been caused by other anchored vessels coming adrift and hitting us. The rocks either side of the bay’s entrance are awash with a larger than normal swell, but where we’re anchored there’s just a gentle lift. With the wind predicted to increase to 25 knots we elect to stay here for the next couple of days finding it perfectly comfortable and secure. 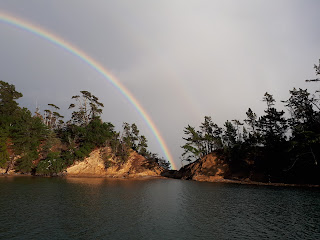 By Tuesday it’s a beautiful sunny day, albeit a bit colder as the wind increases and temporarily shifts a bit to the south. We anchor off Oneroa Bay, slightly further east, where our family members join us having arrived by ferry at Matiatia. We want to cruise east to the Waiheke Channel and it’s decision time. Do we take the route to the north of Waiheke enjoying the sheltered northern coast, but risking heavy south-east seas when we turn south into the Firth of Thames, or do we cruise east along the Tamaki Strait on the southern side of Waiheke expecting a large wind-driven chop for most of the way but no heavy seas? We elect the latter and cruise south down the west coast of Waiheke in tranquillity before turning east at Park Point into the full brunt of a steady 35 knot south-easterly gusting into the 40s. Although the wind-driven chop is about two metres high it’s directly on our bow so Rapport’s 16 metre hull handles the conditions well at about 8 knots with plenty of spray but little discomfort and with conditions gradually improving as we approach the Waiheke Channel. Normally with a south-east wind we’d anchor in Ponui Island’s Chamberlin’s Bay, but with the exceptionally strong winds we find residual swell from the Firth of Thames so anchor slightly further to the east in the more sheltered Te Kawau Bay.

During the next few days the south-easterly is far too strong to venture out into our favoured fishing areas of the Firth so we seek out new fishing spots in the more sheltered waters of the Waiheke Channel finding two locations that provide plenty of action.

Faced with the “weather bomb” it would have been all too easy to cancel our cruise, but we enjoy ten great days away confirming that winter cruising even in poor weather can be enjoyed.