OUR FINAL CRUISING DAYS ABOARD ENVOY

Envoy's ownership is now transferred to Larry and Catherine Wood of Brisbane, Australia and we're sure they'll have as much fun and adventure as we enjoyed.
Envoy has been de-registered from the NZ Shipping Register in preparation for her new Australian listing.
We've been back home in Auckland for three weeks now and busy searching for a new boat. We looked at about 15 before we found one we really liked and signed the deal last Wednesday, subject to survey, sea trial and engineering report. This should be all complete in about two weeks and then I'll provide some details.

Now back to the Med. It's late September and we leave Kastos Island to cruise through the Dragonera and Echinades Islands. There are several islands in this remote and barren group with many fish farms among them. 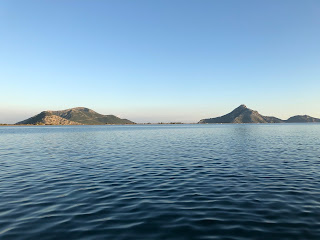 Although there are good day anchorages here it's not the place you'd want to move around at night if you needed to, so we head to the nearby mainland coast and anchor at a bay called Ormos Dhioni. This is nothing special but well sheltered and just a few hundred metres from the mouth of Greece's longest river – the Achelos, a slow flowing river passing through marshlands and forming a shallow sandspit where it flow into the sea.
Next day we cruise about 25 miles to Messalonghi. This is a very sheltered harbour about half a mile wide at the end of a two-mile-long canal from the sea.

The canal going to Messalonghi has some interesting dwellings 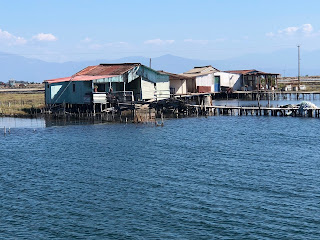 Here we find a handful of yachts anchored and the superyacht Christina O moored alongside the jetty. This is the ship formerly belonging to Aristotle Onassis and named after his daughter. The ship is a converted WW2 warship which saw service at the D Day landings and was beautifully restored and modified.

Christina O by day and night 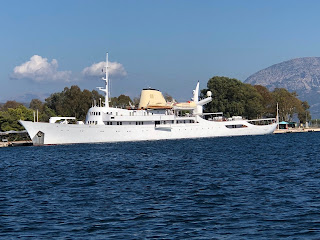 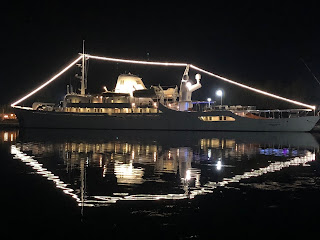 Messalonghi is important in recent Greek history as a centre of resistance to Turkish rule. In the early 19th century the Turks attacked the town and 7,000 citizens escaped through a gate in the walls and fled into the hills. Unfortunately they encountered some Albanian mercenaries working for the Turks and were ruthlessly slaughtered.
Here my brother Charles joins us having flown in from Scotland for our final cruise aboard Envoy back to the marina.

Charles by gate through which 7,000 people passed before their slaughter 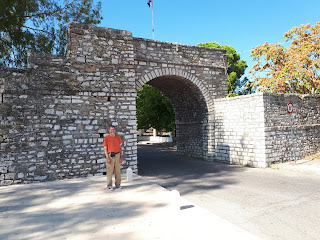 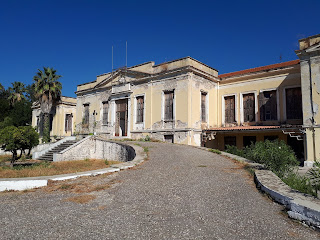 We cruise to Ormos Antissamos on Cephalonia Island and during the night there's a lot of distant thunder and lightning but no problem for us. Next day we head to Kalo Limani where it's very calm until midnight, but then another thunderstorm starts and continues non-stop until dawn with some very heavy rain but without the violent winds that normally accompany these storms. Charles wonders what he's got himself into having come here for some great Med late summer weather.
Next day we motor to nearby Ay Eufemia to find it's been severely flood-damaged by the heavy rain and the sea is brown to several hundred metres offshore. As we approach the harbour we're warned not to enter because of the large amount of driftwood floating around so we anchor outside and take the dinghy in. Many shops have been flooded and the locals are busy cleaning up and trying to get the thick mud off the roads and footpaths. 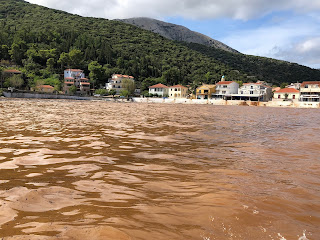 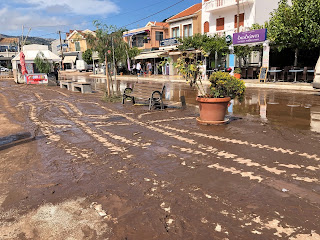 Next day we cruise to Ormos Vlikkho on Lefkada Island. Our anchor isn't free-falling very well indicating the windlass needs greasing, so we strip the above deck components and give it a good grease – then it's all good. We spend a few days here basically just filling in time before we go to the marina and doing wintering preparation.

There are hundreds of dinner plate sized jellyfish in Ormos Vlikkho 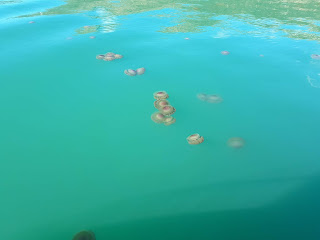 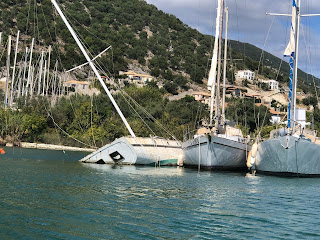 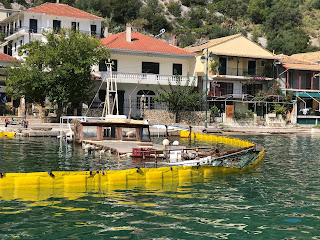 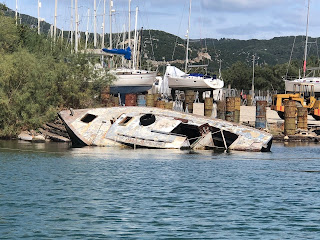 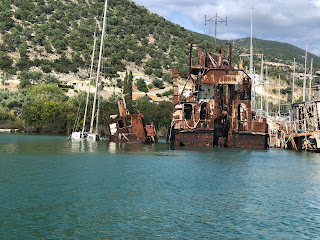 On Monday 7th October the forecast is for strong winds and “destructive thunderstorms” so we decide to go into Lefkada marina a couple of days early. On the way in we refuel for the only time this year (our new boat won't be quite so economical!) putting in 1,690 litres plus the Stanadyne fuel stabiliser that we use.
Next posting – our final days aboard Envoy.

Thanks for sharing such kind of nice and wonderful information......Nice post keep it up and keep sharing. Do you want boat accessories? Visit here Cool Boat Accessories