We're home in Auckland and Envoy is in Greece's Lefkada marina.

Our involvement with Envoy is over as she's now under the control of her new Australian owners, Larry and Catherine.
We've been looking at buying a new (pre-owned) boat and have taken one to survey stage, so if we proceed with this boat I'll give more details next week.

It's early October and we're back in Lefkada marina with my brother Charles aboard. It's fitting that he's with us for our final days aboard Envoy as he's the reason we're here. In the early 2000s Charles and his French wife Marie sailed their 34ft yacht Acrobat from Brisbane to Turkey and invited us to join them there  in 2004 for a couple of weeks cruising. It was during that time Diane and I decided to do this Med cruising.
We came into the marina two days early because a “destructive thunderstorm” was forecast and we didn't want to take any chances – we've seen what they can do! However despite our caution this time the storm doesn't materialise.
The day before we come to the marina the generator fails to start – it turns over OK and runs provided the glow plug pre-heat switch is kept activated but stops when this switch is let go.
Charles and I check it over and change a few relays to no avail.
Sailand's electrician Velissaris comes aboard and when we explain the issue he nods his head knowingly, saying that probably the oil or coolant level is too low. I'm skeptical as I'd checked the coolant level the same day, however we check it again and find it's slightly low. We add coolant then lo and behold all is good.
The generator has always needed a very small amount of coolant added every couple of weeks, however we ask Velissaris to check the generator's cooling system during winter and the exhaust system while they're at it.
We have six days before catching the bus to Athens and this is plenty of time to prepare Envoy for winter. Our final short cruise is from our marina berth to the haul-out area – how many times we've stood by watching Envoy being pulled out or launched! 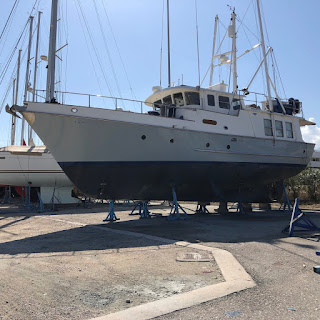 Maybe this will be our next boat? 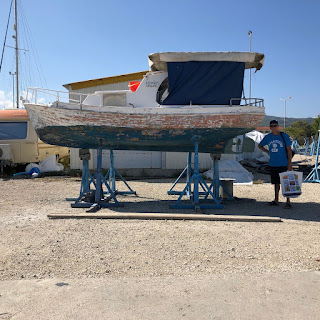 This year's cruise has been great and we've enjoyed sharing it with Chris, Larry and Catherine and Charles. We've visited Greece, Albania and Italy and cruised 964 miles.
We recall some of the challenges we had making this an interesting cruise: a leaking bilge that took Sailand about a week to permanently repair, the major storm in the marina at Taranto, a large motor vessel hitting us in the marina at Gallipoli, getting our anchor stuck in a bay in Italy, a storm in Ay Eufemia harbour with other boats adrift, being detained by Coastguard for a week after our EPIRB inadvertently activated, losing and then finding our RHIB in Albania and being anchored in Vlikho Bay when an adrift yacht nearly hit us. All good fun!
So folks I see that our first post was in late 2006, so after 13 years that's the end of the Envoy Blog, although I will post a bit more material here, particularly regarding our new vessel.
Envoy was perfect for this Med adventure, but our next boat will be somewhat different!
Thanks for following us.

Thanks for sharing such kind of nice and wonderful collection......Nice post keep it up and keep sharing. Do you want boat accessories? Visit here Cool Boat Accessories

This Is An Excellent Post I Seen. I Have To Thanks To You To Share It It Is Really What I Wanted To See Hope In Future You Will Continue For Sharing.
Vessels Crew Boats