NEW BOAT NOW IN OUR LIVES

The purchase of our new boat has now been finalised and we take over ownership in the next few days.
While Envoy, as a full displacement vessel, was perfect for the Med, we never intended to buy such a vessel here. Instead we have been looking at planing or what are commonly called "semi-displacement", although I'm told this term is not technically correct as a vessel is either planing or it's not.

We planned to buy a boat around 14 metres and looked over around 20 without finding anything that really suited us in terms of either design, space or condition until we found "Awesome" by accident when we wandered onto the Westhaven sales jetty of a broker called Orams Marine.

We saw Awesome sitting there with a For Sale sign, went aboard and within minutes felt she was the right boat for us. At 16 metres she is a little larger than we intended, but she has the advantage of three separate sleeping cabins and two bathrooms/Heads. Much of our boating will be with other couples aboard (or Chris aka MacGyver of course) so this is perfect, She's powered by twin Cat 3208 diesels and has a generator and water maker. 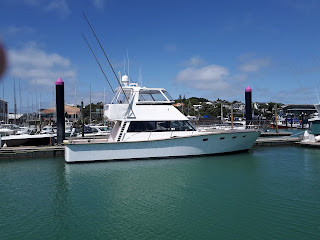 Although Awesome has a leading designer - Salthouse, she's built from alloy, which was a complication for us initially as we knew little about larger alloy boats although realised that many rugged commercial vessels are alloy. A rigorous in water and out of water survey including ultrasonic testing of the hull detected very few issues and a sea trial with a GoughCat engineer aboard doing tests verified the engines as being sound. In fact both Cats and their Twin Disc gearboxes were reconditioned in 2014 and only have 600 hours on them since.
The previous owner has used her mostly for offshore game fishing and she's done many trips to remote places like the Three Kings as well as Cook Strait crossings and a voyage from Picton to Auckland. Awesome has additional fuel tanks for long range so can carry nearly 3,000 litres of diesel, which should give a range of over 500 miles at lower speeds.
During the sea trial fully loaded with fuel, water and five people aboard she achieved 21 knots wide open throttle at 2,800 rpm, but her usual cruising speed on the plane is around 15-17 knots and 2,200-2,400 rpm.
We expect to use her off the plane quite a lot, cruising around 8 knots.
We'll be berthing her at our preferred marina - Hobsonville (previously called Westpark) and will be changing her name to "Rapport", the same name as our last boat owned in Auckland in partnership with our always-missed great friend Brian.
Awesome doesn't have much gear aboard so we've been busy buying tools, spares, galley equipment, bedding, safety equipment etc.
Hoping to start a two week "shakedown" cruise this weekend.

Congratulations on the new boat. Looks good, and now you can move fast for a change. God bless those who sail in her.

Thanks much for sharing. Bluewhale hardware offer variety of boat parts and accessories for all your needs. Our Company provide retail and wholesale services, If you like our products then order us, you can also order our products in bulk as well. boat Hardware

Thanks much for sharing. Bluewhale hardware offer variety of boat parts and accessories for all your needs. Our Company provide retail and wholesale services, If you like our products then order us, you can also order our products in bulk as well. Boat Outfitters

This is such an amazing blog about yacht I really liked the blog. Thanks for it. Keep sharing here.Top insulated cups Handle with the best quality of stainless steel is Made of Brass. We have 2 sizes, please check the measurement chart carefully before you buy the item by click Insulated Cups Handle

Wonderful article!marine flooring We will be linking to this great article on our website. Keep up the great writing