We're now back home in Auckland and Envoy is safely on the hard at Lefkas marina, Greece.
We're now in the process of changing legal ownership of Envoy to Larry and Catherine and associated matters such as converting insurance and taking Envoy off the NZ register.
However we still have three or four postings to do to complete Envoy's epic under our ownership.

I'm going to add some photos to this posting in a few days.

It's mid-September as we leave our anchorage at Ormos Varko heading further south to Syvota, mentioned many times on the Blog, and then on to Cephalonia, one of the most attractive of the Ionian Islands. The weather is still warm being in the mid 20s and the sea temperature is 25d, but as usual in September over here the weather is unstable with many thunderstorm warnings.
Here we anchor at a not-so-popular (because there's no tavernas or shops) but very sheltered bay called Kalo Limani.
In the early evening we notice a few Coastguard personnel and what appear to be soldiers on the beach and somebody snorkeling around the shallows. We're anchored about 200 metres off the beach and see Coastguard personnel instruct the skipper of a yacht anchored much closer to the beach to move away. The yacht comes over to us and the skipper says he's been told to re-anchor behind us because they've found an unexploded WW2 hand grenade in the shallows and the bomb disposal team are going to blow it up. Apparently someone was snorkeling around earlier, noticed the grenade and called the Coastguard. Of course Cephalonia was the scene of much activity during WW2 including the events depicted in the great movie Captain Corelli's Mandolin. So we sip our wine and wait for the blast. We expect to see a fountain of water erupting, but the reality is disappointing, sounding like two fire crackers going off.
Next day we cruise south to one of our favourite anchorages – Ay Eufemia for a couple of nights and meet a nice couple Duncan and Julia from Falmouth aboard S/Y Rampage (what a great boat name). 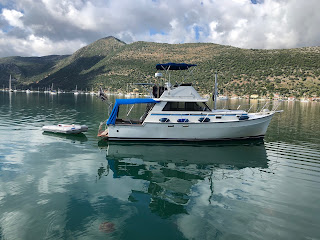 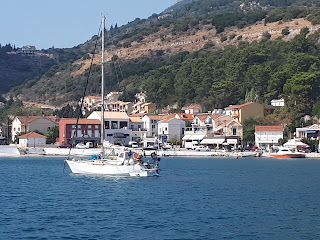 This season we've met many interesting fellow cruisers, mainly from Australia, NZ, UK and Italy.
One of the nights here we encounter a severe thunderstorm with winds up to 43 knots and the classic 180 degree reversal of wind direction. One catamaran and one monohull yacht drag, but as usual Envoy is OK, though the storm did keep us up on watch for a couple of hours during the night.
We spend a few days around the island of Ithica re-visiting some favourite haunts and encounter yet another thunder storm while anchored in Vathi Harbour. This one is prolonged, lasting about three hours, but with the wind only reaches about 20 knots with no boats dragging. 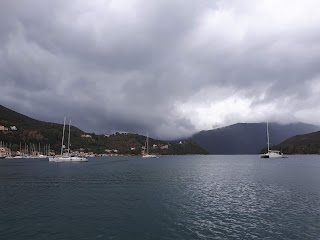 With an even worse weather forecast we head back to Lefkada Island for one night, anchoring in the very sheltered Vlikho Bay. The swell is close to 2 metres providing a good test for our Naiad stabilisers, which perform well and as the wind increases we take some spray over the bow for the first time this season.

Cruising back to Vlikho with foul weather behind 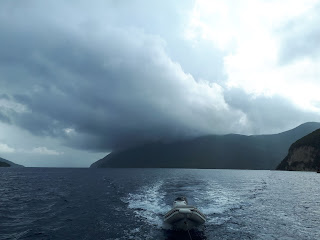 As usual there are huge numbers of dinner plate sized jellyfish here – I counted 30 around Envoy at one point so definitely not the place for a swim.

Late in the afternoon the wind increases to about 20 knots and I see a yacht about 100 metres in front of us to windward turn beam to wind and start to drag towards us. We start the engine and start to pull up our anchor to move out of the way, but the yacht is moving too fast and I realise we won't pull up the anchor in time. Our only alternative is to let out much more chain and power ourselves out of the way of the yacht. It's a close call but the yacht passes by dragging her anchor and fortunately not fouling our chain. I notice that she drags at least another 200 metres before her anchor bites and holds.
We need to meet my brother Charles who's flying into Athens so head to Messalonghi, about 70 miles away on the mainland as here has good bus connections with Athens and is a place we've never been.
We spend the first night at Port Leone on Nisos Kalamos. It's perfectly calm here and we have a great night anchored off the derelict village, abandoned after an earthquake in 1953.
Next day we anchor off Port Kalamos and go ashore for a look around before heading to nearby Nisos Kastos and anchoring in very sheltered South-East Bay. It's deep here and we anchor in 23 metres. 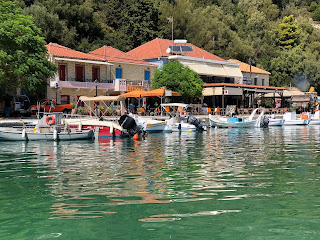 Autumn is coming and we need to put a blanket on the bed for the first time since summer started and we're no longer needing our electric fans to keep cool.
We explore more of Nisos Kastos, which is a really nice island, before heading to Astakos on the nearby mainland, anchoring off the village and going ashore. 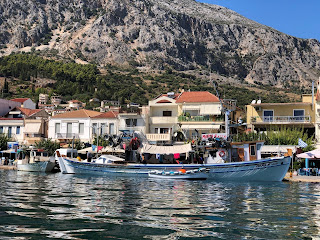 The wind comes up to 25 knots, building a heavy chop and making this exposed position untenable overnight so we cruise down to nearby Port Marathia. It's very windy here too but it's offshore and we have good holding despite a half metre wind-driven chop.
Next Post is cruising through the Dragonera and Echinades Islands to Messolonghi where we see the superyacht Christina O, formerly owned by Aristotle Onassis.

If you want Eco friendly yoga mat then visit us
https://neumeestore.com/


Very Nice Post.I find always useful articles from your site. Thankyou So much for share with us.
Are you looking for door decalsWe guarantee satisfaction.