RETURN TO ENVOY AFTER A SHORT BREAK BACK HOME

Envoy is currently cruising to Preveza, mainland Greece. Still having problems loading images so that's why there's not many.

Late in the evening of Sunday 28 July we arrive back to Envoy berthed at Taranto in Italy. There's a 20 knot wind blowing and the boat is moving around making it tricky to get our luggage back aboard across a bouncing passarelle. All is as we left it except that we inadvertently closed the fridge door (we usually leave it wedged open when its not operating) and in the high heat a bit of mould had formed inside. However this is soon cleaned up.
Next day the marina lends us a car and driver to take us to a supermarket a couple of km away where we do a huge shop to re-supply. It's fun in these smallish and unfamiliar Med supermarkets, but there always seems to be a shortage of trolleys.
Taranto is interesting but seems a bit run down with a lot of derelict, unoccupied buildings.
Next day we cruise back to Porti di Caesareo – already mentioned previously. Some locals take a shine to us and insist on taking us ashore for coffee and delicious cake.
That night Envoy rolls a bit and our RHIB, which is lifted out of the water at the transom, moves around and abrades some of our sign writing off the stern. Fortunately we have some spare decals aboard so this can be easily remedied.

Gallipoli
Envoy's new owners – Larry and Catherine from Brisbane are due to join us shortly for a couple of weeks so our agent had arranged a marina berth in Portolano marina at the beautiful town of Gallipoli.
This “marina” is a bit of a joke really – there's just a floating pontoon making a poor attempt at blocking waves from the open sea and it's quite rough inside. The lazy lines connecting the mooring lines to the jetty are far too short so they are more or less floating and one get's caught up in our bow thruster – damn! Last time this happened we had to pull Envoy from the water to free it at a cost of nearly a thousand bucks. More on this soon.
Fortunately we are bow on to the swell so it's not too uncomfortable, but at one stage our passarelle is moving through a range of about a metre up and down.
We arrive there early afternoon and by late afternoon there's a strong wind blowing directly into the marina, which has little room to manoever as it's really of a size for smaller trailerable boats.
A twin-engined displacement motor boat slightly larger than Envoy arrives to berth next to Envoy. As the boat comes in I can see the skipper has no idea what he's doing and he allows his boat to be taken so far downwind that there's no chance of him turning stern-to the jetty. His boat slams broadside into Envoy and the two boats next to us. Where he hits Envoy is the forward end of our anchor, which is now making a good job of grinding into his teak capping rail and adjacent gelcoat. The skipper's wife rushes out and attempts to push their boat off, but the on-scene marinaras and myself warn her away – there's a real risk of serious injury. I put out our heaviest duty fender to try to minimise damage to the other boat but it soon bursts with the pressure – later the other skipper pays me for it. The skipper then makes things worse by using power and wrapping a mooring line around one of his props. The marinaras then use their large RHIB to tow the boat upwind and back outside the marina. One of the marinaras takes over the boat's helm and to his credit does an excellent job of docking her even with one engine unusable. He lines up the boat at the entrance and reverses at remarkably high speed straight into the empty berth next to Envoy. The other boat also needs a diver and we are told to expect him next day at 0700. I am very sceptical about this – nothing happens during early mornings in the Med. My scepticism proves waranted when he arrives about 1000. Then he does a great job of removing the lines fouling our bow thruster and our neighbour's prop.
Next day Larry and Catherine arrive. It's Catherine's first time aboard and she likes Envoy very much. They aren't really concerned by the primitive marina, but meanwhile we have organised a berth at Bleu Salento marina inside Gallipoli harbour for the next two nights. Bleu Salento is only slightly dearer at 120 Euros per night but is perfectly sheltered with properly laid lines and plenty of room to manoever.
We organise a rental car and do a couple of days touring the local area including the stunning town of Lecce, already covered in a previous posting.

Great view from cafe near Gallipoli 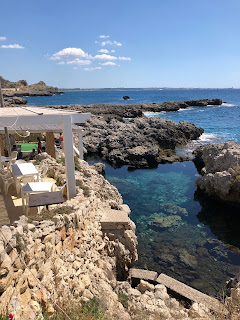 Larry and Catherine quickly adjust to shipboard life and we cruise to Santa Maris di Leuca to anchor off the marina. During the night the wind changes to onshore making for a rather uncomfortable night – at least we thought so, but Larry and Catherine didn't seem to mind. We set off at first light heading for Greece on what would turn out to be an eventful day.