Envoy is now anchored at beautiful Cephalonia, Greece.
Fingers crossed we seem to have sorted out our photo issue now.


I meant to mention that although Envoy has two aircons – a forward unit cooling the two sleeping cabins and an amidships unit cooling the pilothouse and saloon – we only use these to provide an AC load for the generator as to use them properly we'd obviously have to close all the portholes, doors and windows - something Di and I don't like to do. Also to use the aircons we need AC power which means being on shore power or running the generator or running the Lugger with the inverter.
While we're in Gouvia marina waiting for the epirb situation to be resolved it's hot – like up to 37d. It's generally hotter in marinas as there's less wind than at anchor and large expanses of concretes that soak up and then radiate the heat. Larry and Catherine are having a bit of difficulty sleeping in the heat and suggest we run the forward aircon all night. So we close the portholes and do this, finding after about an hour or so the temperature drops about 5dC and more importantly the humidity drops considerably. So this is a useful experiment and we find the slight hum of the aircon working on shore power not a problem, though we wouldn't do it at anchor as we'd have to run the generator all night.

We have already spent a few days in Albania with Chris earlier in the season but now need to spend another few days there to avoid over-staying our allowed 90 days in Greece. On our three previous trips we've stayed at Sarande so this time decide to cruise a few miles north and south of Sarande. To do this our agent, Jelga, needs to file a cruise intinerary with the Port Police. At the Sarande dock is a very traditional Arab dhow about 120 feet long with its crew all decked out in traditional long white robes and turbans. Jelga tells us it's owned by an Emarati princess and when the dhow arrived the authorities laid a long red carpet from the dock to the Customs hall.

There's very few boats anchored here, but one is a NZ yacht called Sparrow. We meet her owners Peter and Dash and enjoy a great dinner ashore together costing a ridiculously low 19 Euros per couple.
Next day we start cruising north and anchor at a very sheltered bay east of Cape Kiephali. Here it's very remote, accessed only by a dirt road. There's a couple of houses ashore and a fish farm taking up some of the bay's space. At dusk we see two guys ashore dressed in military style clothing acting rather suspiciously. Dusk turns to dark and they are still there - doing what? We find it slightly scary so lock our doors during the night for the first time ever. 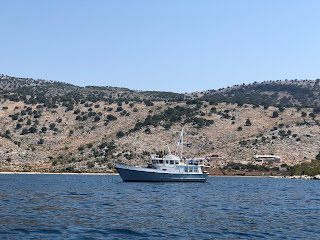 Next day we cruise further north to anchor off Qeparo Beach, east of Palermo Headland. Here is also very sheltered and there's a few tavernas ashore, one of which we visit for a cold and cheap Albanian beer. The barman speaks no English but we all manage OK. At both of these anchorages we are the only boat.

Grotto near our Qeparo Beach anchorage 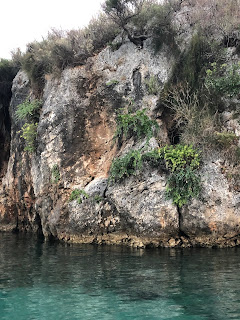 Peter and Dash meanwhile have cruised past us to go alongside the wharf at Palermo Bay. This is a disused military wharf and very rough with lots of protrusions and no proper bollards. Although it's only a couple of miles from where we were last night Peter says they got winds gusting 40 knots whereas we had none. The main attraction at Palermo Bay is Ali Pasha's castle, which we've already seen so we move on to anchor in Himare Bay. 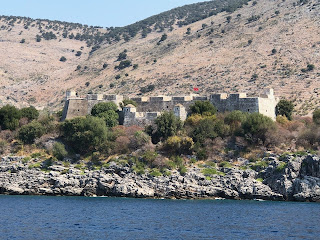 Tucked in close at the north end of the bay close to a wharf there's reasonable shelter from the prevailing northerlies, although a bit of residual swell finds its way here. The village is quite atmospheric, even if a little run-down and the locals are mostly quite friendly – even the local Port Police who visit us to check on our ship's papers. The main issue here is small boats moving at high speed very close. We take a taxi to Himare's ancient Kastro high in the hills for some spectacular views of the coast. 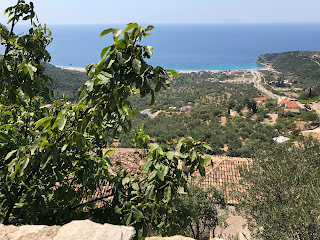 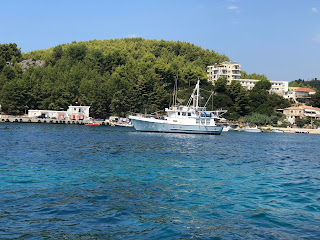 There are some very run-down apartments in Himare 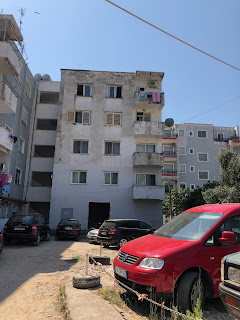 On the way, passing Sarande we notice our dinghy is missing – my fault as I was the one who secured it (not very well). We haven't cruised far so backtrack about two miles to find it drifting near a rocky shore. It'stoo risky to take Envoy that close to a lee shore so we anchor off about 50 metres and I swim over to the dinghy which by now is very close to rocks. I manage to climb onto the rocks, push the dinghy away, climb in and start it. I get a few metres away from the rocks and the engine stops – the painter is still dragging in the choppy water and has wound around the prop. I jump back into the water, manage to free the prop quite easily, get back into the dinghy and motor over to Envoy. A good ending to a silly mistake. 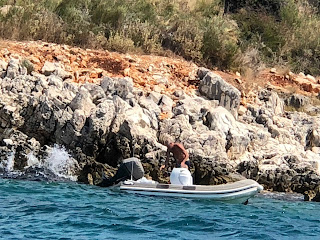 The only really nice anchorage we found to the south of Sarande is Ftelia Bay, which is very remote and perfectly sheltered from all wind directions except southerly. Again we are the sole boat here and one side of the bay is Albanian while the other is Greek. Some years back it was a military zone and cruisers weren't allowed to anchor here but it's all much more relaxed these days. There's no tavernas or facilities here but Ftlelia would rank among one of the nicest anchorages we've found. 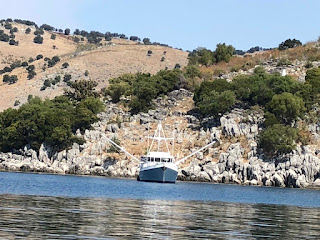 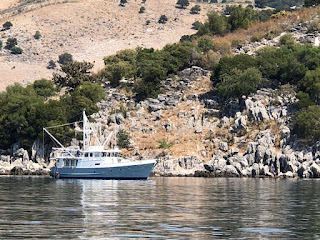 Old fisherman's cottage on Greek side of Ftlelia Bay 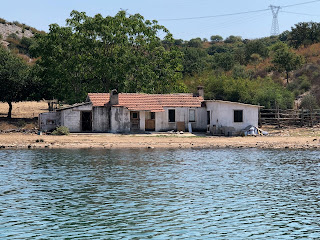 So we clear-out of Albania and head back to Corfu's Gouvia marina to clear-in to Greece for the last time. The cost is 60 Euros for both clearing in and out, compared to 150 Euros to clear in and the same to clear out of Greece.

How Lemeridian funding service  grant me a loan!!!

Hello everyone, I'm Lea Paige Matteo from Zurich Switzerland and want to use this medium to express gratitude to lemeridian funding service for fulfilling his promise by granting me a loan, I was stuck in a financial situation and needed to refinance and pay my bills as well as start up a Business. I tried seeking for loans from various loan firms both private and corporate organisations but never succeeded and most banks declined my credit request. But as God would have it, I was introduced by a friend named Lisa Rice to Le_meridian funding service and undergone the due process of obtaining a loan from the company, to my greatest surprise within 48hrs just like my friend Lisa, I was also granted a loan of $216,000.00 So my advise to everyone who desires a loan, "if you must contact any firm with reference to securing a loan online with low interest rate of 1.9% and better repayment plans/schedule, please contact Le_meridian funding service. Besides, he doesn't know that am doing this but due to the joy in me, I'm so happy and wish to let people know more about this great company whom truly give out loans, it is my prayer that GOD should bless them more as they put smiles on peoples faces. You can contact them via email on {lfdsloans@lemeridianfds.com Or lfdsloans@outlook.com} or Text through Whatsapp +1-989 394 3740.