With Envoy's new owners, Larry and Catherine aboard we have left Italy's Santa Maria di Leuca at first light bound for Greece.
For those who don't know, an EPRB is an emergency position indicating radio beacon and when activated provides rescue authorities with your vessel details and position. You wouldn't use it unless in case of dire emergency combined with inability to give your position by VHF radio.
Just north of the Greek island of Othoni our old EPIRB with an expired battery, which I had kept on board activated by itself. This causes a Coastguard boat to come out from Othoni island to check we are OK as well as radio calls from Olympia Radio, the Greek rescue authorities. We explain both by VHF radio to Olympia Radio and in person to the Coastguard people alongside us that the EPIRB had activated by itself with no human intervention and I thought that might be the end of it – but no such luck. The Coastguard said we would have to go to the closest port - a small but lovely village on the south side of Othoni island called Ammou and would not be permitted to leave until Envoy had been surveyed for safety.


Port Authority building at Ammou where the Coastguard are based 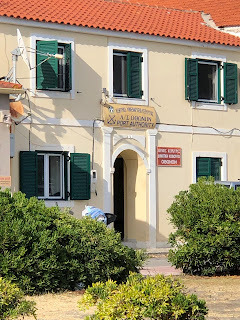 Well obviously there are no surveyors on Othoni and there's only an infrequent ferry service to Corfu. I ask the Coastguard if we can go to Corfu for the survey but they say no. I imagine this situation drawing out into many days and having to hire a water taxi to get a surveyor out to us. I'm also concerned about Larry and Catherine - although we're at a lovely bay they wouldn't want to spend the whole remaining time of their trip here and how would they get to Corfu to catch their ferry back to Italy? I also have concerns about the "survey". Few boats would pass a comprehensive survey without some preparation and we don't have that opportunity.
So I get our agent A1 Yachting involved and once again they perform great, putting me in touch with a Greek/Australian surveyor based in Corfu who soon manages to get permission from Coastguard for Envoy to move to Corfu's Gouvia marina. Even for this to happen he also had to get a letter of approval from the NZ Consulate in Athens. After arriving in Gouvia we find that our berth is very close to the Port Police base and assume they want to keep an eye on us. It takes five days for the necessary checks to be made and paperwork completed. The "survey" in fact turns out only to involve de-registering our old EPIRB, registering the new one we already have on board, checking our VHF and making some modifications to it. You can't rush bureaucracy but Larry and Catherine weren't fussed as it gave them a few days to see Corfu and for Catherine and Di to enjoy doing some shopping together.

We also hire a car and visit Corfu's west coast village of Paleokastritsa and the remote mountain village of Palia Perithia. Here we have lunch at a taverna patronised by Rick Stein, but unfortunately on our visit all find the meals a bit under-whelming, even though the taverna itself is atmospheric.

My final involvement with the epirb situation is to go to the Coastguard's Corfu office to pick up our clearance to leave. The surveyor says this will take 10 minutes but in fact it takes about three hours, mainly waiting around for people. Corfu's main Coastguard office has about 80 people working there and it's hard to find the right one to deal with. Finally I manage to find the right guy and he is reasonably friendly, even organising a coffee for me. He initially seems to find complications, but suddenly hands me some documents and tells me Envoy is free to leave.
So we leave the marina - free people again and have a nice few days cruising the bay's north of Corfu.  During this time we're anchored in  a large bay when two large twin-engined seaplanes come zooming down and skim across the water filling their sea water tanks for fire fighting. They do this several times and we jole that we've put this show on especially for Larry and Catherine.
We never did get an explanation on how the EPIRB may have self-activated, but the local expert said it was unlikely to be caused by the expired battery. Anyway I think the lessons here are don't keep an EPIRB with an expired battery aboard, but de-register and dispose of it and make sure you register your new one immediately after purchase.
After several more days cruising in Corfu Larry and Catherine leave us, looking very much forward to starting their very own Envoy adventures. 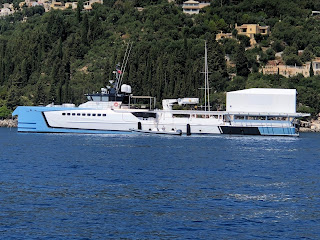 Next day we clear-out of Greece to spend a week or so cruising in Albania.

We thought this rock looks like a bear sitting down 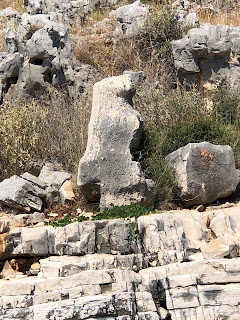 You two were great. Would not have changed a moment of it.
Thanks for everything. Larry and Catherine