As I write this we’ve been in Level 4 lock down for nearly five weeks now and hopefully we’ll be going down to Level 3 next week and 2 the week after. So let’s hang on in there.

From a boating perspective we haven’t missed out on too much as until the last few days the weather has mostly been miserably wet, windy and chilly. Roll on Level 2, warmer weather and the resumption of boating – we can’t wait!

Here’s an edited version of an article to appear shortly in Pacific PowerBoat re cruising around the Ponui Island area.

In Auckland we’re spoiled for choice of great cruising destinations with about 1,200 square miles of the mighty Hauraki Gulf and dozens of islands on our doorstep, explaining why Auckland is said to have the largest number of boats per capita in the world.

One of our favourite inner Gulf islands is Ponui. Maori were the island’s first inhabitants during the 1400s and evidence still remains of 23 separate pa sites. The island was purchased in 1853 by the Chamberlin family, who remained through the generations and still farm the island to this day. Ponui translates as “long night” and judging from the number of cruisers who frequent this area we’re sure there’s been many an enjoyable and long night spent here.

Ponui is about four miles long in a north to south direction, one to two miles wide and indented with numerous bays and coves offering at least 20 good anchorages, well spread around the island allowing cruisers to find safe shelter in all wind conditions. The highly informative Royal Akarana Yacht Club Coastal Cruising Handbook (a must have on board for cruisers) provides excellent information on most of these anchorages, so we’ll focus on just three of our favourite areas.

By far Ponui’s most popular anchorage is Chamberlains Bay (also called North Harbour) bordering the northern coast’s Ruthe Passage separating Ponui and Rotoroa Islands. This large bay offers great shelter in westerlies through to southerlies and for light north-westerlies and south-easterlies, although in stronger south-easterlies an uncomfortable fetch comes into the bay from the Firth of Thames. You’ll notice that Coastguard have a mooring for their rescue vessels in the bay’s north-west corner. Chamberlains Bay (note spelling of this bay is different to that of the Chamberlin family name) has no particular hazards except for its muddy bottom gradually shoaling towards the southern shoreline. Immediately to the east are two great sandy beaches easily reached by dinghy. If anchoring off these beaches watch out for the rocky outcrop between the two beaches and monitor your depth. Part of Chamberlains Bay’s appeal is that if the wind shifts to the north or east boats can easily move less than a mile across to Rotoroa’s South-West Bay to shelter. This bay also has three moorings available to rent by prior arrangement at $25 per night. The Salvation Army ran an alcohol addiction treatment centre here from 1911 until 2005 and during that time no landing was allowed. It’s reputed that sometimes desperate alcoholics swam out to boats moored here trying to score a drink. Nowadays visitors are encouraged, but no dogs are allowed as Rotoroa is a wildlife sanctuary with kiwi and weka abounding. It’s well worth visiting their interesting Exhibition Centre and your kids will certainly love the nearby brick jail house. You’ll have to avoid the temptation to leave them there! Take a walk over the island for spectacular views of the Firth of Thames and visit Men’s Bay and Ladies’ Bay on Rotoroa’s east coast - great anchorages in settled westerly conditions. Formerly cruisers could only gaze at these near-perfect beaches from afar, but can now enjoy their white sand, crystal clear waters and gnarly shade-providing pohutukawa trees.

Shark Bay on the island’s western side bordering the Waiheke Channel isn’t mentioned on the NZ 5324 Chart for this area, but it’s the bay to the north of Oranga and Poroaki Bays. Oranga Bay is too shallow for anchoring, but take your dinghy in to see the shipwreck on the shoreline with its impressive propeller and the nearby remains of two boilers. You’ll also see plenty of rays gliding across the seabed searching for kai.

Shipwreck in Oranga Bay on a great early July day 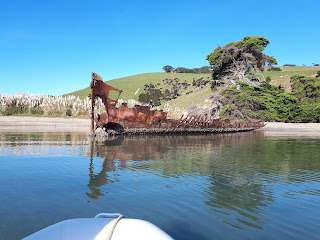 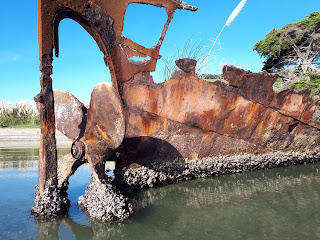 Poroaki Bay can be recognised by its several homesteads and protruding western headland providing protection from the prevailing south-westerly wind. Very often there’s also a large powered barge moored close to shore. Between Shark Bay and Ponui Head to the north are two unnamed bays with excellent sandy beaches and shelter from southerly through to north-easterly winds, but be aware of an unmarked rock south west of Ponui Head (marked on chart). The only negative for this area is wakes produced by large motor vessels travelling at speed through the Waiheke Channel. 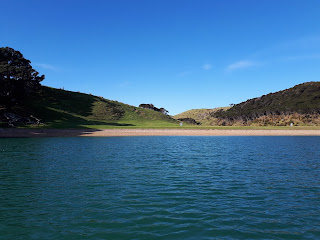 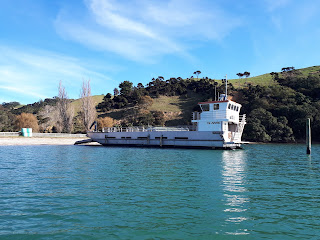 Bryants Bay on Ponui’s north-east coast is a settled weather anchorage suitable for northerly through to south-westerly winds. It’s well protected by Scully Reef and consists of three small bays, two of which are really stunning, together with a large anchoring area outside these bays. This is an area where we’re often happy to anchor for several days and holding is good, but be aware of close to shore rocks. About half a mile south is another well sheltered bay with a fine sandy beach.

Fishing is generally good around Ponui, particularly on the eastern side in the Firth of Thames and we’re always able to feed ourselves, however on the north-western side be aware of the Te Matuki Marine Reserve extending across to Awaawaroa Bay on Waiheke Island’s south coast.

There are large signs on Ponui Island’s foreshores advising the island is private property and that no dogs, fires or camping are allowed. I spoke to one of the island’s three farm owners who advised boaties may land on beaches provided they observe the above limitations. Ponui is home to nearly 2,000 brown kiwi, descendants of just 13 released in 1964 and dogs and ferrets are their main predators so there’s good reason to ban dogs. While most dog owners are responsible a minority apparently think leashed dogs are not a problem and that rules don’t apply to them. However even leashed dogs can upset farm animals and wildlife while their scent is an issue in bird breeding areas sometimes causing birds to abandon their nests.

There is no fuel, water or supplies available in this area, except for wine at the very pleasant Man O’War Vineyard. On a fine summer’s day you’ll find dozens of inflatables ashore here enjoying the sandy beach and the selection of winery beverages and snacks. Closest groceries are at Rocky Bay while for fuel and water you’ll have to make the eleven mile trip to Pine Harbour marina.

We really enjoy anchoring in these areas around Ponui and hope you will too, but remember if going ashore to act responsibly by taking no dogs, lighting no fires and taking your rubbish away with you.

Next Post will be about cruising at low rpm without compromising your engines’ performance and longevity.