In early October Tommo from Caterpillar spent most of a day servicing our twin Cat 3208 engines and I spent this time with him, learning a lot in the process. They’re supposed to be serviced annually or every 200-250 hours and although they’d only done about 140 hours since the last service we needed to get the service done before the summer holiday rush. Half the cost of service is the multitude of filters, oils, anodes and other service parts replaced.

Due to covid we hadn’t used the boat since June, so in mid October did a three day shakedown cruise around Rakino & Waiheke Islands. The fishing was surprisingly good and we caught one snapper 62cm long. 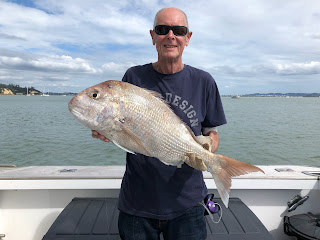 We also found a few issues not related to the Cats service.
The windlass deck switch wasn’t working so replaced that.

Rapport has a NEMA 2000 network information sharing system and we found some elements weren’t working properly. Subsequently the Furuno agents, ENL, came to the boat and quickly found the problem caused by two faulty network cable connectors which they replaced.

But the biggest issue was the recently serviced generator kept shutting down after about 30 mins operation. On return to the marina we found the 5 year old start battery had gone flat and replaced it, but that didn’t help. Our regular contractor called in a genset electrical specialist who after a couple of hours investigation found that during the service the oil pressure switch had been replaced with an incorrect type. The switch is supposed to send a signal to shut off the glow plugs after working oil pressure is reached, but this switch wasn’t doing that so the glow plugs were staying on and sucking 10 amps from the battery. Once the correct oil pressure switch was fitted all was OK.

Over Labour Weekend we took out John, Alice and our grandkids Lily, Veida & Axel. Again the fishing was good and the kids all caught their first ever fish, but what sizes. We spent an afternoon ashore at Waiheke's Man O’War vineyard and although enjoyable was way too crowded with long delays for food. 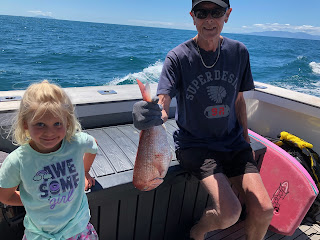 We had another two weeks aboard during November, including on week with Chris. The weather wasn’t great with winds up to 30 knots and many showers, but everything ran well and again we had an abundance of snapper.

After a year of ownership we’ve logged 70 nights aboard and that’s not bad considering all the time we couldn’t go out due to covid restrictions.

We've postponed our Whitianga trip to around March-April.