At this point in our story Envoy's still in Italy, berthed in a not-so-good marina, but in a very picturesque location - Otranto. For several days there are over 20 knot winds outside the port causing two metre seas that create a surge in the port. All the moored boats move around and strain at their mooring lines, in fact we joke that it's a lot rougher here than in many anchorages. Nevertheless locals say Otranto is tenable in most conditions, even at anchor.
Otranto is in an area known as Apulia, steeped in history with many interesting places to see.
We arrange a taxi to take us to the historic town of Maglie and the fare is a very steep 40 Euros for about a 20 minute ride. Our visit coincides with siesta time so there's virtually nobody around in the streets and piazzas and nothing open. For the return journey Chris negotiates a cheaper fare of 30 Euros. The driver's a nice young guy and tells us he has a girlfriend, but that there's a big problem with the summer high season coming. I ask him if the problem is him having to work extra long hours. “No,” he replies. “It's due to the temptation of so many pretty girls around.”

We learn it's much cheaper to hire a car than use a taxi and arrange a rental for 40 Euros per day to visit Lecce – one of the main attractions in Apulia and known as the “Florence of the South” with its Baroque style buildings. There's also an impressive Roman ampitheatre in amazingly original condition discovered during excavations for a new building in the early 20th century. However the temperature's in the mid 30s - much too hot to wander around for too long so we spend much of our time in a shady cafe soaking in the atmosphere.

We have our final day and night out with our close friend Chris in Otranto and bid him farewell.
Chris has been our companion aboard Envoy longer than any other guest and contributed not only to the fun but used his energy, enthusiasm and skills to assist with many maintenance and upgrade jobs – thank you McGyver!
The wind drops and we're able to leave Otranto. It's not that the sea was particularly rough, but more our lack of local knowledge of nearby safe anchorages. The Cruising Guide says they are very few, but we find our first one just three miles south of Otranto, not even mentioned in the Cruising Guide and nicely sheltered from the predominating northerly wind. We stay here two nights with about 20 smallish boats anchored during the day but only we overnight. On the first night a police boat comes to check on us about 0200hrs and leaves us in peace after a brief chat. Fishing boats also work very close to us but leave us alone the second night.

Porto Miggiano
We cruise about five miles further south to a fantastic anchorage called Porto Miggiano. I note the log that so far we've cruised 184 miles since leaving Lefkada in early June and not a drop of spray has come on deck so far!
Again there are many dayboats but only us during a glassy calm night.
Ashore there are hundreds of bathers adorning the small beach and larger rocky foreshore, seemingly oblivious to the heat and the sun's ultra violet rays. People don't go to the beach for peace and quiet here and loud music booms across the water from early afternoon.
Nothing seems to happen early around the Med, so the nicest times in these anchorages are the tranquil mornings and evenings and these times generall coincide with when the wind is lightest too. 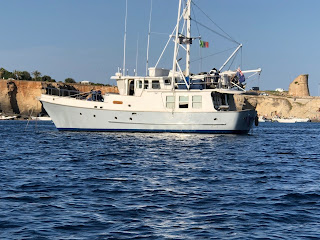 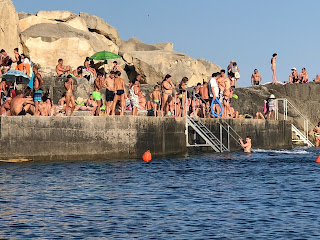 I want to get some information about our next anchorage called Porto Castro so jump into the RHIB and go over to see some locals in a 40ft sailing cat “Second Life”. As I approach they look at me like “who the hell are you and what do you want.” (later they tell me they were very surprised to see me).
I introduce myself and they tell me Porto Castro is great, that they are going to anchor there tonight and why don't we join them on board for dinner – a big surprise and of course I accept.
When we try to lift Envoy's anchor we find it's stuck. In well over a thousand times anchoring Envoy I think this is only the second time. In the water with my mask and snorkel I see the anchor's fluke is wedged under a large flat bed of rock and the depth is about 12 metres – much too deep for me to go down and free it. So the best alternative is to let out more chain, use our bow thruster and engine to turn Envoy 180 degrees and try to pull the anchor out from the opposite direction. Actually this wasn't so easy in a crowded anchorage with lots of small boats moving around. First I cleat a strong snubbing line on the anchor chain to avoid putting too much strain on the windlass. We reverse up steadily and first time – no luck. The second time we hear an almighty crunch and Envoy pulls sharply back from the strain. At first I think we've broken the anchor chain, but we have success and the anchor has pulled free.

Porto Castro
We cruise down to Porto Castro which turns out to be a great night time anchorage and really nice ashore too, but in the daytime it's subject to residual swell and lots of boat wakes. We have a really fun night with our new Italian friends, party people Sonia, Marco, Riccardo, Matina and another with name forgotten. They have a guitar aboard and I contribute singing The House of The Rising Sun. 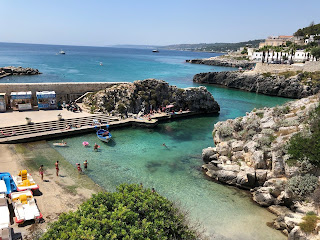 Next day we find a safe place to leave our small RHIB in the crowded small boat marina and have a good explore ashore as well as visiting the castle, towering above the anchorage. 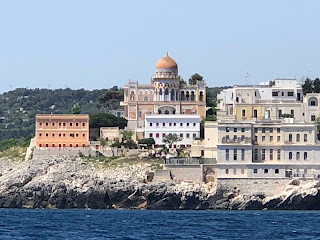 Thank you for your post. This is excellent information. It is amazing and wonderful to visit your site.